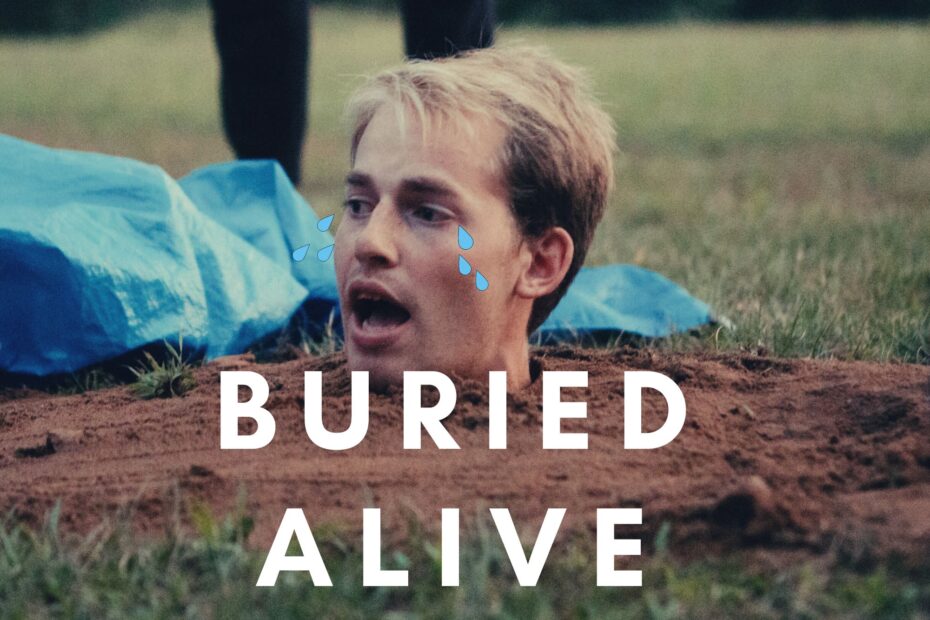 I was sitting in a hammock, planning with one of my best friends. Kyle and I bounced ideas back and forth with a freedom nothing like my upcoming captivity.

“Maybe we could be superheroes wearing our underwear on the outside?”

“Except maybe like rom-com style, and one of us is trying for love?”

None of the campfire skit ideas were landing. Then Kyle volunteered, “We could bury you underground!”

I laughed, then stopped. This could be legendary. On the other hand, what if I got claustrophobic? Or if I had a panic attack and broke character? Ah, whatever. “I’d do it.”

We kept the plan a secret. Kyle dug the pit secretly, covered it up, and avoided suspicion. We hid other items underneath tarps and blankets so the covered hole didn’t stand out. Only two other people know our plan.

First, we had to check with the devotion giver for the night. “Is it ok if there’s a buried person during your devo?” We got the green light.

Later, we were chatting with a former staff member who wouldn’t be at the campfire. We mentioned, “We’re gonna bury Jonas up to his neck and put a 5-gallon bucket on his head. Then, at random points we’ll take the bucket off and he’ll monologue until Kyle shoves it back over his head.”

Her laugh soon turned to disbelief. “You’re really gonna do that?”

That night, we arrived at the site early. Kyle uncovered the pit, and I got in. The only way I’d fit was to sit and pull my knees close to me. “Bury me,” I said grimly. Kyle tossed the dirt in, and I spread it out. In a few minutes, nothing was showing except my head and neck.

Kyle let out a guffaw. “I must look ridiculous,” I said.

“This is gonna be amazing.” Kyle reached for the 5-gallon bucket. “You ready?” I nodded, and my world became dirt and white plastic.

I sucked in air as my chest pushed up on the dirt weighing down on me. I was nearly immobile: only my fingers, toes, and chest could move beneath the ground. I couldn’t push my way out even if I wanted to.

“I think my heart rate’s up a little,” I said to Kyle.

“Are you gonna be good? I’ve got some stuff to grab.”

I was alone. Underground. With a bucket over my head. My heart beat a little faster. My breathing got a little shallower. My instincts shouted to writhe my limbs, knock the bucket off, and gulp the fresh air.

The realization struck me like a Chuck Norris punch to the gut. My heart rate went up again and my breathing sped up. “Just fall asleep,” I told myself. Like that was going to happen.

I had no way to tell time. I knew people would start coming in about fifteen minutes, but how would I know how long it had been? I had been buried at 8:05. It was approximately 8:20.

Finally, I heard children’s voices. They were commenting on the other hidden objects. A little bucket didn’t seem important compared to those large shapes, even if the dirt was oddly upturned around it.

The noise was something to distract me, but I had to control my breathing even more. If I wheezed in a deep breath, the dirt would shift and seem very suspicious.

I knew the voices were kids getting situated for the campfire. It should start in a few minutes. Then I heard footsteps very close and suddenly THUD! A foot sank into the dirt above my left knee.

Oh no. Had I been exposed? I held my breath, motionless, panicked. Then I heard Kyle’s slightly annoyed voice: “Go around please!” He smoothed out the dirt, I got over being smushed, and we were clear.

Shortly, Kyle started the campfire skit with a song. Soon this darned bucket would be off my head. I planned the monologue I would begin with.

As I waited, a couple items were revealed, to the great amusement of the crowd. Kyle took audience input as to which item to reveal next: they cheered loudly for a tarped humanoid shape and not at all for my bucket. Ignoring them and eliciting groans, Kyle lifted the bucket off my head.

The audience gasped loudly. But I was free! ” I AM NO BODY!” I triumphantly shouted. “I HAVE BEEN UNFAIRLY COVERED UP AND WILL TAKE NO MORE OF THIS TREATMENT!” I went on for another minute or two before Kyle had enough and shoved the bucket back over my head.

Soon I decided it was time to talk again. I thrust my head back and knocked the bucket off. “TO ILLUSTRATE MY WOES, LET MY TELL YOU ABOUT MY EXPERIENCE WITH A TACO.” Kyle’s patience was thinner this time, so my monologue was cut off sooner.

This went on sporadically for the rest of the 45-minute skit. Eventually, my time was up. The bucket went back on for good, and the devotion began.

This was when I realized the intense agony I was in. The pain had been growing for a while, but it had been easy to forget about while the action was on. Now that I was alone in my bucket again, I had little else to think about.

My bottom was on fire. Not moving an inch for an hour was nearly intolerable. Every neuron in my twisted mind screamed, “Shake your booty!” To make matters worse, my knees hurt worse than an arthritic armadillo.

Of course, I literally could not move either body part. Only my toes and hands could wiggle.

Plus, as the devotion leader started speaking, I felt a tickle on my neck. Something was crawling towards my face, and it wasn’t small. But I couldn’t move my arms to swat it away.

My teeth and fists were clenched. I inwardly groaned, “10 more minutes. Just ten more.” Those 10 minutes were stretched longer than a peasant on a medieval torture rack.

I wanted to shake the bug off. I wanted to try to stand up. I resisted.

I gritted it out, and the devotion ended. We sang the closing song. The campers got up and left.

Finally, as they were leaving, a staff member came up and took the bucket off my head. “Can you get out?” he asked.

I sure tried. I pushed as hard as I could and tried to lift my arms, but the dirt didn’t even budge. “You’re gonna have to dig me out.”

In a couple minutes there was a pile of excavated dirt and a crowd of concerned onlookers. I heaved my way up and stepped out of the pit. Free at last! I took a step to celebrate and promptly tripped since my foot was asleep.

I wasn’t getting up. Lying sprawled on the ground covered in dirt was perhaps the most glorious moment of my life. Blood rushed to all my cramped fibers, and I savored my freedom like never before.

Surviving that pit was the essence of being a Dashing Galoot. Only galoot would attempt such an absurd thing, but only a dashing one could pull it off. You, too, can be a Dashing Galoot. Just dig yourself a pit and sit in it for an hour and half.

Of course, maybe that’s not the most appealing method to you. Instead, perhaps it would befit you more to be like my friend Kyle – the true Dashing Galoot of the story – and convince other people to be buried for your entertainment.