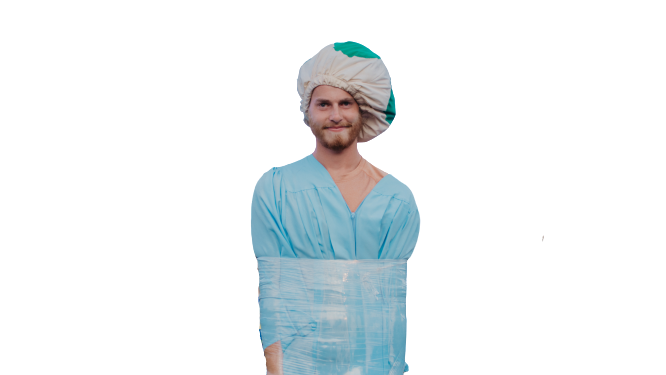 Due to a lack of recent articles, I have below posted a class assignment I wrote last week. Please enjoy, and look forward to forthcoming articles this weekend.

Music blared outside of the dank closet I was being tied up in.

The plastic noisily encircled first my arms, then made its way down to my hips and knees, then wove back up towards my upper torso. I glanced around at the closed door, the dusty walls, the dim lighting, thinking how I’d get out. The guitars and yelling outside didn’t help.

The saran wrap made its way around my body again, enclosing my blue robe in slimy plastic. I shifted my arms half an inch. They couldn’t move farther. My legs weren’t much better, but I could tell wiggling would loosen the wrap.

Kyle tucked the end of the wrap into my robe.

“Can you fix my hat?” I asked, cocking my half-covered eyebrow.

He reached up and readjusted my green spotted mushroom cap. “Do you need help walking?”

The music had just ended; campers and counselors wiping off the sweat and sand from the mini-concert we call Song Period. I made my way to leave the closet.

It was a month of leaving. That August the military left Afghanistan, Simone Biles left the Olympics, Nigerian children left their kidnappers. And then there were those that couldn’t leave. Australians and New Zealanders with new lockdowns. China imposing strict travel restrictions. People stuck with few options for freedom.

I was in the latter category. “Can you get the door?” I asked, unable to move my arms. Kyle kindly opened the door for me and I exited, calmly, in front of the masses of children.

Eyes widened. Heads turned. I said nothing, looming. The full spectacle must have been something to behold: flame-orange sandals, long periwinkle robe, and a green-spotted dirty white sack of a hat. The leaders of that night’s all-camp game began their spiel, running through rules and whatnot. Sweat started to condensate on the plastic surrounding my long-sleeved, robed arms.

Eventually, they got through the rules. It was going to be some sort of capture-the-flag tag-each-other-until-you-want-to-fall-over-from-exhaustion game. The other staff members were dressed as animals. What was I, they asked.

I scooted my humble limbs forward eagerly. “I… am a SEA CUCUMBER,” I trumpeted, pitching my voice up and pronouncing my vowels how I imagined an ocean-floor resident would. Laughs. General amusement. My moment passed.

“To the field!” the game leaders cried. Off went the hordes of juveniles up the hill, towards the distant field – not a problem for unentangled legs. What had led me to choose a sea cucumber, of all things? There are other ways to use an excess of plastic wrap. When they said, “Choose an animal,” did I really have to pick the most contrarian thing to squirm into my mind? Sometimes being different isn’t worth the inconvenience.

My first challenge was a 12-inch ledge. I could hop off, but if I tripped, disaster. My constrained arms had no way to break my fall. Other staff kindly offered to help, but I had already chosen independence from them. I hopped, surprisingly monotonous scenes of my 19-year life flashing before my eyes, a parachute-less skydiver, off the ledge.

Plop. I landed, teetering, and then stabilized. All was well for the adventurous cucumber for now. I wobbled off up the hill, being passed on all sides by enthusiastic kids ready for the game.

The plastic shifted around my frame, and I realized that I could easily free my arms with a little effort. And with my arms free, my legs could follow and these hot-shot kids would see who could really move. But then I’d have to shed my badge of uniqueness like a pharoah undoing his grave wrappings, returning from the mysterious world of the sea cucumber to the normalcy of four-limbed mammals.

“Hey, sea cucumber,” a kid taunted as she strolled by. “Gonna make it?”

Swallowing, I grinned. “Slow and steady wins the race.” Cool as a cucumber.

I stumbled slowly towards the field. By the time I got there, the game had started, but the party hadn’t. By now the plastic was soggy with sweat and threatening to slide down my arms, but I tried not to let it dampen my excitement.

I tried hard to play the game. People ran past me, but by the time I shuffled over to tag them they were long gone. I didn’t know what I’d do even if I caught them, armless as I was. Kids pointed and smiled at my clumsiness. Their amusement stirred something inside of me.

I would not be made a fool of. Sure, I’d chosen an absurd animal and costume, but giving up now would be a disgrace to creativity. Others might have left. I was sea cucumber or cucumbust.

“For the cold team!” I yelled, and hopped frantically to pillage the other team’s base. Children sprouted from the ground to tag me, and thanks to my ineptitude I was sent to “jail”, my ephemeral heroics quickly stifled. Trudge, trudge, trudge. Every sandy centimeter of the patchy ground was a marathon to my glued-together legs.

Things didn’t get better when I got to the area marked as the jail. The plastic wrap had adjusted itself to the shape of my body, gathering around the slimmest parts of my body. Noticing this, another staff member called to me, “Oooo! A cucumber with a booty!”, catcalling me over the prominent posterior bulge the plastic wrap emphasized. I flushed. Campers were listening!

The staff member was not done yet. She brought over another staff member: “Check out this cucumber’s booty,” she teasingly said. The newcomer smirked and added to the banter. Finally, a jailbreak was called and I was allowed to leave this purgatory. As I moved away, I tried to peer over my shoulder to see my bottom, but I couldn’t catch the great view everyone was talking about.

“Cold team!” I shouted again, trying to enthuse myself as much as the kids. I took off after another child, futilely trying to provide some benefit to my team. The awkward movements of a sea cucumber seemed to intrigue some nearby campers, who came over to gawk. A staff member stepped up behind me while I thrashed. As I turned to look at him, he playfully gave me a slight nudge. There was nothing I could do; I hit the ground harder than London Bridge.

“Help!” I moaned piteously. “Somebody, please!” This only pleased the audience more, and a small crowd gathered to watch me flail on the ground. “Please! Somebody help me!” The eyes of the children showed only mirth, not an ounce of compassion for a beached aquatic vegetable. Soon the campers dispersed, leaving me alone on my back in the dirt. The sandy dirt was sticking to my moist skin and plastic, but I was powerless to brush it off.

I closed my eyes. I could walk off right now. Just a flex of my thighs and elbows would allow me to slip out of my polycarbonate prison. But this was a cell of my own making. Escape here only meant escape from myself. A meandering child looked at me and laughed. I gritted my teeth and began another round of thrashing.