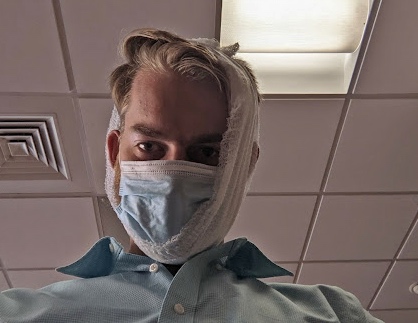 It all started at a church picnic, which makes it sound like I had a religious awakening. Nope, I split my scalp open. How in the world does one bust open their head at a church picnic? Well, first I was setting up tents. Large, event-style tents with poles and iron pegs and a confusing set-up manual. I took to pounding pegs in with a hefty sledgehammer to avoid the chaotic discussion of what goes where. Of course, I’m a sledge master, so that was uneventful. Next I rolled some big, unwieldy tables in, but that was also uneventful, as of course big unwieldy things are nothing to me. Then came the piñata.

See, I’m pretty tall and I like to jump, so I’m decent at hanging things. In fact, about a week before I helped hang a duct tape rope ladder from a high tree branch, so I thought I’d hang this piñata in the same way. Someone tossed a rope over, but not all the way over, so I prepped to jump for it. With all the power my legs could muster I leapt. And stopped well short. “Huh?” I thought. “Ouch!” I thought next. Then, “There’s a lot of red stuff pouring from my head!”

I stood there in shock for a minute. Don’t worry – in true Dashing Galoot fashion I got no blood on my splendid shirt since I still kept the wherewithal to lean my head forwards. My brother ran for paper towel, and the ground accepted my donation of O-.

After I got my scalp wound cleaned, I sat down to wait. For an hour. Surprisingly, I didn’t seem concussed at all, but I sure felt bored. Eventually someone who knew something said it needed stitches. I personally felt this was ridiculous. It barely hurt! Who’d drive me? I’d drive myself! No, you’re bleeding out and maybe concussed! Well, then I’ll stay! I don’t wanna be bald!

From that dialogue it is obvious that I went to the ER. As I sat in the waiting room for 2 hours watching Seinfeld, the irony occurred to me of getting injured jumping into a tree instead of out of a tree. Meanwhile, a house burned down on TV. It was a relaxing experience, all in all.

Eventually, they brought me in and the doctor said I was getting staples to my head – do I want painkiller or not? Of course, being a Dashing Galoot I said, “Nah”, so in comes the doctor with a staple gun and goes pop pop pop pop. To be fair, a little water leaked out of my eye, but it wasn’t bad. Not really.

At any rate, I hopped right outta there and went to clean up after the church picnic. At least, I thought, I’m better off than the piñata that caused this! Better a head wound than my guts ripped open and eaten!