Why I’m Not Funny Anymore 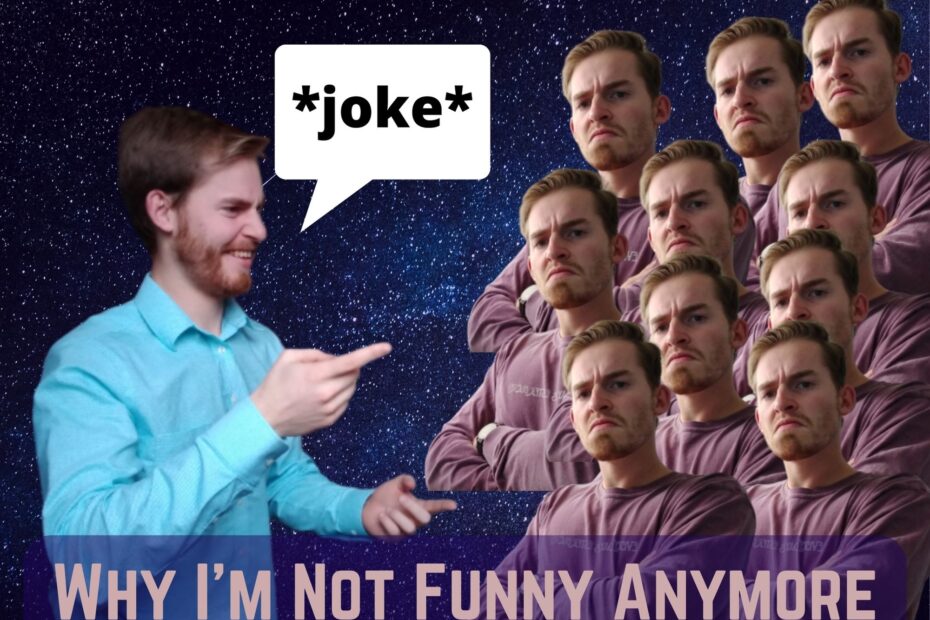 Prithee, Egads, Confuffle, and Hearken to the message I hereby purport to assuage your yearning ears with! The Grand Galoot has fallen from his lofty perch on the mountain of humor. There he sat for a long while, yellow and fluffy like a Big Bird, until a bunch of metaphorical Snuffleupaguses shoved him down to reside in the verifiably villainous valley of corniness. The author of this magnificent ode to intelligence has determined that due to his audition failures, his odious habit of laughing at his own jokes, and his increasingly corny style of humor, he is no longer funny.

The first point of interest is the author’s total stinkiness at auditioning for comedy groups. On March 15, 2022 the formerly fun fomenter of this essay failed foppishly at finagling his way into the fiendishly exclusive improv group on his college campus. This shows how incompetent he is at being funny, for one, and for two it shows how he extinguishes the life from those he tries to enlighten, making him an anti-Prometheus. The auditioners found him to be duller than the wrong end of a kitchen knife. Moreover, since the ignominious essayist could not squeeze into the improv group, he is obviously terribly boring. To succeed in improv one must create on the fly, but the only thing this author created was a roomful of snoring. Thirdly, the essayist demonstrated a complete lack of self-respect with his awful auditioning. He convulsed on the floor like a beached manatee hooked up to a defibrillator in the name of humor. His idiotic New York accent made it so the only thing the auditioners could say to him was “get outta here!” So he did.

The author of this essay also proves is non-funniness by frequently laughing at his own “jokes”. Even when no sane person understands his attempts at humor, he makes sure to support himself. He could be a candy factory for all the snickers that come out of him. Laughing at one’s own jokes is morally deplorable. Some famous person once said an exclamation point is like laughing at your own joke, which tracks because when people see the author they exclaim and point at his absurdity. The reason for this impolite laughter is that the author wishes to instruct his audiences. When he tells a joke and is met with blank stares, he feels obligated to show how to react to “top-notch” humor. Of course, he makes himself look entirely foolish by doing this and would look and sound better with duct tape over his mouth.

In addition, the essayist’s jokes are becoming cheesier and more resemblant to the dreaded species, “Dad Jokes.” Some of his jokes are so stale you’d break a tooth on them. For example, during one particularly embarrassing day, he used Variations on “I’m Hungry”/”Hi Hungry” upwards of 11 times in the span of a couple hours. This spectacular lack of creativity points to a very juvenile mind. Additionally, his pun usage has seen a sharp uptick recently, which is never a good sign. When someone says they need to get a garment tailored, saying, “I know a tailor! Taylor Swift!” is not an appropriate response, but apparently the author thought it was. Clearly he is using bad puns to compensate for his deficiencies at making quality jokes.

It is clear that the author needs to realize he is no longer funny. His audition failures and laughing at his own lousy jokes are evidence enough. And yet this codsnogger has the audacity to keep posting “humorous articles” to his personal website! Someone needs to break it to the poor guy that he just isn’t funny anymore.

*believe it or not, this is all supposed to be funny because Jonas still thinks he is funny even with the abundance of evidence against him. In fact, he is probably laughing harder than you are at his own article right now. Thanks for reading.

7 Ways to Stay Single This Valentine’s Day
Latest Poem: Shave Me From Myself