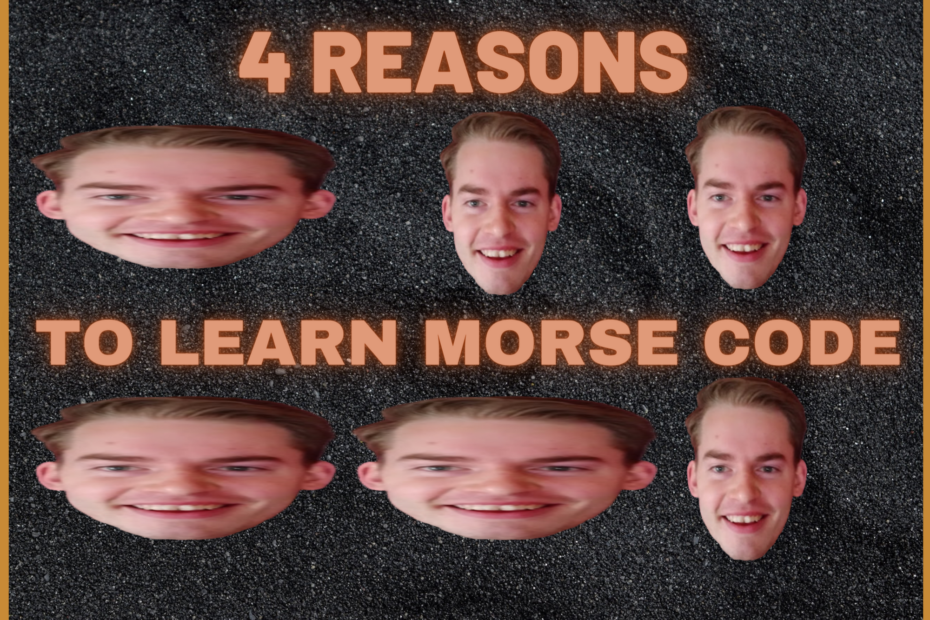 If you don’t know Morse Code, you might be feeling remorseful. There are countless benefits, and learning only takes a morsel of your time. I will nevertheless attempt to count the countless benefits on your behalf so that you don’t morse out (too far?) on any of these good things.

About a year ago, I decided to learn Morse Code. I had made a couple half-hearted attempts before, but this time I wanted to have it down entirely.

I downloaded an app to help, and forced my roommate to endure endless beeps and boops. Within a couple of hours, I had it down pat (although I eventually had to review). Read on for the advantages of learning Morse Code and the best ways to pick it up.

1. Pass Secret Messages on to Your Friends

Think of all the opportunities where it would be so nice to say something to your friend without anyone else being able to understand. It’s a lot easier to tell a friend they have lettuce stuck in their teeth if you don’t have to announce it to the table, for example. After all, then your friend might give the lettuce to someone else!

Jokes are also better via Morse Code. Everything is funnier when you’re surrounded by people who don’t get what’s going on. Soon they start fidgeting, wondering what could possibly be so funny, which only adds to the humor of the situation.

Morse is great for these situations because it doesn’t have to be auditory. If your friend knows what to look for, you can use blinks, finger signals, or rain dances (if that’s your thing) because you only need two options – one to stand for dot, one for dash. Something subtle like a wink ensures that no one even notices that you are communicating.

However, I have a confession to make.

I don’t have any “friends.”

I mean, I don’t have any friends who use Morse Code with me. Of course I have lots of friends *nervous chuckle*. All the benefits I have been telling you about so far have just been hypotheses of what it would be like if I had such a special someone in my life. If you would like to be that special someone, please comment below.

Please note that by special someone I only mean “friend who uses Morse Code with me.”

2. It lets you feel superior to monoglots

If you learned Morse Code, you too could have this opportunity to use the insults that float around in your head. It is a harmless way to avoid accidentally saying those roasts out loud.

Plus, it’s great practice for being witty. When I get no response from my first insult, I can naturally follow with –. — -/ -.– — ..-/ .- –. .- .. -. “You monolingual cretin!” and it’s off to the races from there. It’s hard to stop coming up with clever things to say because you have so much time to think while you’re tapping out the last one.

3. Everyone will think you’re a drummer

As you incessantly tap on whatever surface is nearest you to practice. Honestly, that’s not a bad thing. The drummer stereotype is cool and easygoing, meaning that Morse code will make you seem cool and easygoing. Obviously.

On the other hand, if your local band director asks you to join her jazz combo, don’t say I didn’t warn you.

4. It could save your life

A captured American actually used Morse code to send a message to the US secretly. The North Vietnamese forced him to go on TV saying how nice his treatment was, but he blinked out the dots and dashes to spell out “T-O-R-T-U-R-E.”

In survival situations, being able to flash messages using a bright light could help save you. Maybe it’s more unlikely than being asked to join a jazz combo, but it’s possible!

And think: what if you are imprisoned with only a telegraph to send a final message to your friends and family? If you didn’t know Morse Code, you wouldn’t be able to express yourself.

Or what if every button on your keyboard breaks except the hyphen and the letter O? If you knew Morse Code, you could still text your friends (albeit very slowly).

How to learn Morse Code

The first method I tried was brute memorization. It seemed hopeless, however, as I looked at the seemingly random assortment of scratch marks. There just seemed to be no rhyme or reason to the list.

Fortunately, I found a helpful YouTube video that explained the principles of how more frequent letters had easier combos. It also suggested a mnemonic tool to memorize them. It helped – I quickly memorized the whole alphabet. Then I just as quickly forgot everything.

On try #2, months later, I tried a different strategy. I realized the memory tricks weren’t actually helping my comprehension, so I downloaded MorseMania.

It quizzed me by playing the sounds of each letter, gradually working up to the more complicated letters.

It worked great! I was learning quickly, and after *only* a couple hours of practice I could rapidly identify any letter after hearing its sound.

Whichever method you choose, you will eventually reap the benefits I’ve mentioned. Except maybe the saving your life part. Put a Morse message in the comments to get a jumpstart on your learning! …. .- …- ./ ..-. ..- -.!